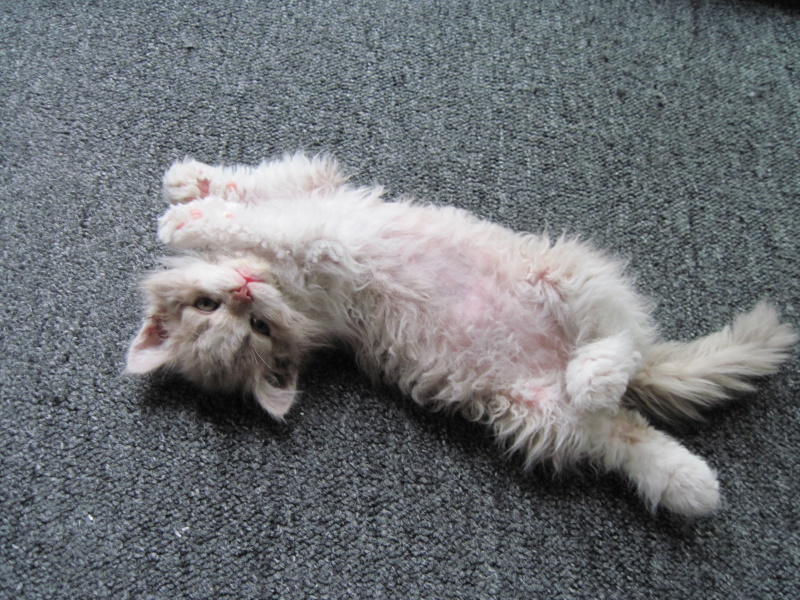 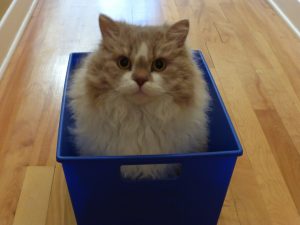 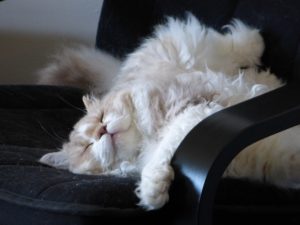 Our second installment is written by Dr. Farly about her cat, Fred.

Fred had a rough start to life. At 3 weeks of age, he was accidentally caught under a rocking chair which fractured one of his front legs. An orthopedic surgeon evaluated his x-rays and said that because a growth plate in the bone was affected, an amputation of the limb would be necessary. However, Fred was too young to undergo surgery right away. He would need to remain on pain medication and strict rest until the surgery could be performed 6 weeks later. Faced with extensive care and an amputation in such a young kitten, his heartbroken breeder had some difficult choices to make. Therefore, she was relieved when I offered to adopt him and take over his care. Fred had to be bottle fed at first, but his system didn’t take too well to the kitten formula and he suffered from recurrent diarrhea. With all these shocks to his system, he lost the underside of his coat and he earned the nickname “Ugly Little Duckling” for a while. Despite all his troubles, Fred was a happy kitten and he would play constantly with his good paw. To everyone’s shock, Fred started walking and climbing with his injured front leg after 3 weeks of enforced rest. Furthermore, the injured bone continued to grow in length which meant that the amputation surgery wasn’t needed! Although Fred has permanent damage to his elbow, you almost can’t tell as he romps around the house.

Fred loooooves to play! One of his favorite games involves jumping on the bed as I try to make it in the morning. He also adores his laser pointer and will perform amazing parkour acrobatics to catch that little red light! Hugo, my other cat, is his best buddy and they often wrestle or play chase together. It’s amazing how much noise two cats can make running up and down the stairs.

Fred loves to eat. Maybe a bit too much….  Afternoon naps are sacred and he will give you the dirtiest look if you interrupt his!!

Ever since he was little, Fred seeks reassurance by snuggling tightly against me and suckling my palm.  This kind of behavior is not uncommon in orphaned kittens and those that were weaned early.

Fred’s injured elbow isn’t slowing him down right now but I expect some issues to crop up as he gets older.

His love of food has led to weight gain. It’s not all muscle under that crazy fur… As with many of our Guelph veterinary clients, I struggle with the management of two cats with very different feeding habits and dietary needs.

When Fred was about 3 years old, I detected a heart murmur. Although he is asymptomatic, I monitor his heart closely as any heart condition can progress over time.

Why my cat is the best:

Fred runs to greet me every morning when I wake up! He is such a joyful and silly cat, I find myself constantly laughing at his antics. His love of life is a constant reminder of why I adore being a Guelph veterinarian.

Up to no good:

The rare times I have coffee at home, I have to keep a close eye on it and carefully dispose of any leftovers. My oddball cat loves coffee and he will actively track down even a single drop. Fred also has a giant sweet tooth, although that isn’t scientifically possible for a cat. If I bring something sweet into the house, I can be sure he will come and try to claim a small piece.

Have a Question? Need to book an appointment?